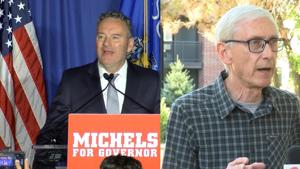 MADSION (WKOW) — After a high-turnout primary election, the general campaign for governor was underway as Democratic Gov. Tony Evers made clear he will tie his Republican opponent, businessman Tim Michels, to former President Donald Trump.

Between his victory speech Tuesday and a new ad released Wednesday, Michels pivoted away from his tone during the primary.

The new ad made no mention of Michels having Trump’s endorsement — something prominently featured in advertising during the primary.

Appearing at a Madison diner with Sara Rodriguez, the Democratic nominee for lieutenant governor, Evers said repeatedly his party wouldn’t let Michels rebrand himself as an appealing option for voters in the middle of this swing state.

“The idea he might try to become — he being Michels — a moderate Republican, is just beyond belief now,” Evers said. “He has taken the lead from Trump.”

Appearing with Trump at a rally last Friday in Waukesha, Michels said election was his top issue.

“The very first thing, my number one priority,” Michels said, “is election integrity.”

Four days later, Michels had changed that priority list based on the victory speech he delivered after former Lt. Gov. Rebecca Kleefisch conceded the election.

“From my first day in office, to my very last day as governor, jobs and the economy are gonna be my number one priority,” Michels told supporters.

However, Canon added it could be harder for a Republican candidate in the era of Trump, especially now when Trump expects his endorsed candidates to remain focused on his baseless allegations of widespread fraud in the 2020 election.

“It is a difficult balancing act to try to not alienate the Trump supporters,” Canon said. “At the time, trying to reach out to those independent voters that will be critical for winning this election in November.”

Canon said early returns suggested Tuesday’s partisan primary had the highest turnout for an August primary in Wisconsin since 1982, with about 26 percent of registered voters casting ballots.

That suggests a very high turnout in November, Canon said, indicating why Michels would want to immediately start making inroads with moderate voters.

“I think he is gonna have to try to a little bit more focused on economic issues,” Canon said of Michels. “Not so much the culture wars, Critical Race Theory, the public schools, certainly not on abortion.”

Michels indicated the economy will indeed be his primary focus over the next three months. Wednesday’s new ad focused on inflation, contrasted with Michels having created jobs as his family owns the state’s biggest construction business.

Evers noted Democrats will need a convicting message on the economy to keep Michels from securing another victory in November. His words Wednesday indicated Democrats believe their best chance is making the election a question of how voters feel about Trump.

“We’re gonna be focusing on what the people of Wisconsin elected me on last time,” Evers said. “And we’re gonna be working hard, also, on the issue of making sure that we can do whatever we can to rein in inflation in the state of Wisconsin.”