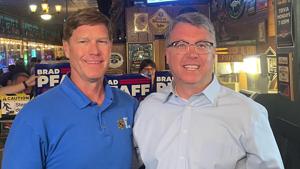 LA CROSSE, Wis. (WXOW) – Following State Senator Brad Pfaff’s win in the democratic primary for Wisconsin’s 3rd District seat, the man who endorses him and held the position for 26 years is speaking on his potential successor to Congress.

Representative Ron Kind says that he’s happy to see a close colleague move on to face Republican Derrick Van Orden in November’s general election, claiming that the ideas of western Wisconsin are rooted in Pfaff’s veins.

“I’m very proud of Brad Pfaff,” Kind said. “He ran a solid campaign and the people responded. That’s because they know Brad. He’s gonna put people over politics every time. Work hard to find common ground. Get things done on behalf of the people here in Western Wisconsin. That’s why I support him. I think he’ll make a terrific representative for us in the United States Congress.”

“Brad’s been running a great campaign because he’s getting out and meeting with the people and most importantly listening to them and the challenges that they face. He did that when he worked for me, as a state senator, when he was Agriculture Secretary for the State of Wisconsin. This kid’s born and raised. He’s got rural DNA in him. He’s a farm kid himself. He knows the challenges that this district has. Especially the rural communities of our district.”

Kind adds that he plans to stay “very involved” with the Pfaff campaign over the next few months.