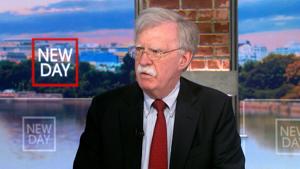 The US Justice Department announced criminal charges Wednesday against a member of Iran’s Islamic Revolutionary Guard Corps for allegedly trying to orchestrate the assassination of John Bolton, who served in senior national security positions during the Trump and Bush administrations.

The alleged plot was “likely in retaliation” for the January 2020 US air strike that killed Qasem Soleimani, commander of the Islamic Revolutionary Guard Corps, the Justice Department said.

After the strike, leaders of the terrorist organization vowed “revenge against Americans” for Soleimani’s death and publicly lashed out against then-President Donald Trump and other high-ranking officials in his administration.

Prosecutors say Shahram Poursafi, a 45-year-old Iranian national and IRGC member, attempted to pay $300,000 to an individual in the United States to kill Bolton.

He has not been arrested and remains at large.

Poursafi originally contacted the US-based individual — who was secretly working as an FBI informant, also known as a “confidential human source,” or CHS — and asked them to take photos of Bolton “for a book that Poursafi was writing,” court documents say.

He later asked if the informant could hire a person to “eliminate someone,” who was later revealed to be Bolton, and promised protection for the CHS and the assassin, prosecutors say. Poursafi also allegedly suggested the murder should be done “by car,” provided the CHS with an address for Bolton’s office, and noted that Bolton had a habit of taking walks alone.

In November 2021, the informant traveled to Washington, DC, and sent Poursafi photos of Bolton’s office and descriptions of the building. Poursafi allegedly said that the killing should happen in the building’s garage, as it was a “high traffic” area.

Poursafi has been charged with the use of interstate commerce facilities in the commission of murder-for-hire, which carries a 10-year maximum prison sentence, and attempting to provide material support to a transnational murder plot, which carries up to 15 years in prison.

In a statement, Bolton thanked the Justice Department, FBI and Secret Service for their efforts.

“While much cannot be said publicly right now, one point is indisputable: Iran’s rulers are liars, terrorists, and enemies of the United States,” Bolton said. “Their radical, anti-American objectives are unchanged; their commitments are worthless; and their global threat is growing.”

Bolton was Trump’s fourth national security adviser for a little over a year, starting in April 2018 until Trump fired him from the role in September 2019 via Twitter for “strongly” disagreeing with “many” of Bolton’s suggestions.

A hawkish neoconservative, Bolton had previously advocated for regime change in Iran and backed Trump’s decision to pull the US out of the multinational Iran nuclear deal.

This story has been updated with additional details.

What is Utah’s favorite tailgating food?

Bluff Bash: What to expect at this year’s event | News

Salman Rushdie ‘on the road to recovery’ after stabbing, agent says