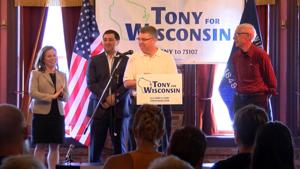 LA CROSSE, Wis. (WXOW) – A slate of top democrats in Wisconsin made their way to La Crosse Thursday as the general election campaign trail begins its way towards November.

The group vowed to protect same-sex marriage, stated that abortion care is health care and claimed their GOP rivals would seek to overturn election results if they were to lose.

Perhaps the biggest issue during Evers’ current term is the handling of the pandemic, and he says he stands by his decisions.

“We follow the science every step of the way,” Evers said. “I know there are people that frankly question the science. That was unfortunate. We did everything we could. Obviously, the Supreme Court took away some of our authority. But then the local people stepped up and did that all across the state of Wisconsin. It wasn’t a perfect situation but we did the best we could under the circumstances. I feel proud of what we’ve done.”

Despite the back-and-forth between the parties on hot button issues, the governor says that several bipartisan issues are being discussed in the state legislature.

“We’re still going to focus on making sure our schools have enough resources,” Evers said. “That is a bipartisan issue. I don’t know of any republican parent, mom, and dad that don’t want good schools. Another bipartisan area of agreement is fixing the roads. Infrastructure issues are important for Wisconsin whether it’s republican or democrat.”

Speaking to the crowd, Kaul says his previous race was decided by point-65-percent and Evers’ by 1.2 percent. Rodriguez stated how much she enjoys visiting the Coulee Region after sharing memories of visiting her grandparents’ dairy farm just outside of West Salem.

How to Vote While Traveling in Your RV