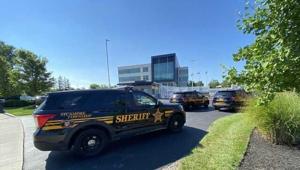 A law enforcement standoff with a man who attempted to breach the FBI’s field office in Cincinnati on Thursday has ended with the suspect dead, according to the Ohio State Highway Patrol.

Lt. Nathan Dennis said that after negotiations failed, law enforcement officers tried to take suspect into custody, but the suspect raised a gun at authorities and was fatally shot.

The man was identified as Ricky Shiffer, according to three federal law enforcement sources.

The FBI is investigating Shiffer’s social media presence and whether he had ties to right-wing extremism, one of the sources said.

A separate federal law enforcement source tells CNN that authorities are looking into whether the suspect had ties to any group that participated in the January 6th attack on the U.S. Capitol or if he participated himself.

The hourslong standoff followed a vehicle chase with the suspect.

Earlier, Dennis said an armed man tried to enter the FBI office in Cincinnati Thursday morning around 9:15 a.m. ET. The suspect was unsuccessful, however, and fled the area.

An Ohio state trooper spotted the suspect’s vehicle at a northbound rest stop along Interstate 71 about 20 minutes after the attempted breach, Dennis said, and tried to initiate a traffic stop before the suspect fled.

“The suspect vehicle did fire shots during that pursuit,” Dennis said in the earlier news conference. The suspect then exited onto State Route 73 and traveled east to Smith Road, where he headed north before eventually coming to a stop.

“Gunfire was exchanged between officers on scene and the suspect,” Dennis said.

At the time of the news conference, no officers had been injured, Dennis said.

“Upon the activation of an alarm and a response by armed FBI special agents, the subject fled northbound onto Interstate 71,” the statement said. “The FBI, Ohio State Highway Patrol, and local law enforcement partners are on scene near Wilmington, OH trying to resolve this critical incident.”

In a message reviewed by CNN on Thursday, FBI Director Chris Wray told the bureau’s employees their “safety and security” was his “primary concern right now.”

“There has been a lot of commentary about the FBI this week questioning our work and motives,” Wray said. “Much of it is from critics and pundits on the outside who don’t know what we know and don’t see what we see. What I know — and what I see — is an organization made up of men and women who are committed to doing their jobs professionally and by the book every day; this week is no exception.”

In remarks Thursday announcing the US Justice Department has filed a motion to unseal the search warrant served to Trump’s Florida home, Attorney General Merrick Garland said he could not “stand by silently when their integrity is unfairly attacked. The men and women of the FBI and the Justice Department are dedicated, patriotic public servants.”