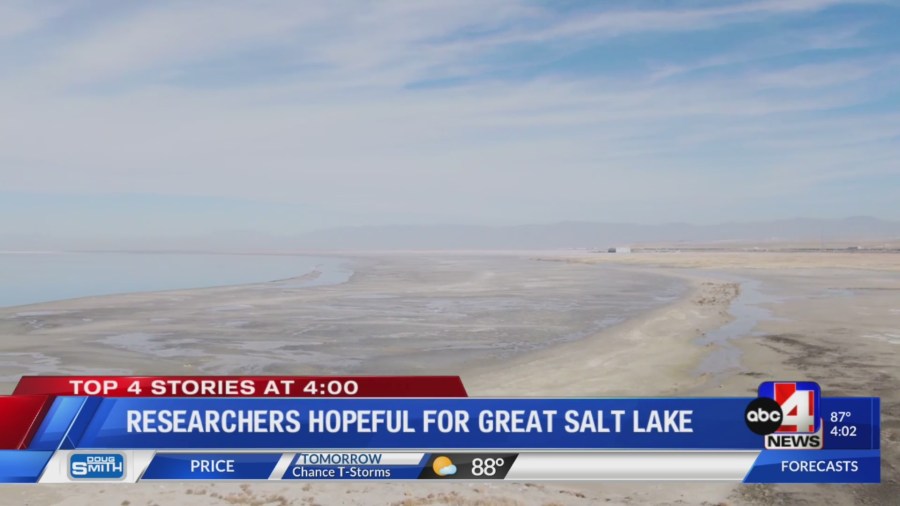 UTAH (ABC4) – Tens of millions of dollars are being used for different research projects focused on the Great Salt Lake. After two consecutive years in which the lake has dropped to record lows, some wonder if it’s too late. For researchers who’ve spent years studying the lake’s health, the time to act is now.

“Pressures are mounting and they’re strong, and it means that we need to act and do something,” Dr. Sarah Null told ABC4. Dr. Null is an associate professor of watershed sciences at Utah State University. She’s been researching environmental water management and what it would take to raise the lake’s water levels for the last 12 years.

“The last 20 years in the American West have been really dry,” said Dr. Null. “We sometimes refer to it as a megadrought. So again, Great Salt Lake is an indicator of that, but also an indicator of how much water we’re using as humans for cities, for industry, for agriculture.”

Dr. Null emphasized that there are natural factors (which we have no control over) that are adding to the lake’s decline. However, human water use plays a major role.

Last summer, so much water was diverted from the Bear River, the single largest source of the lake’s water, that no water made it to the lake. ABC4 visited the Bear River Bird Migratory Bird Refuge at the end of the summer. The refuge is a marshy oasis for migratory birds. It is the last stop along the river before the lake. The refuge reported that the river didn’t produce enough water to fill those marshes, let alone make it to the lake.

As the water level has continued to drop, hundreds of miles of lakebed have been exposed.


What boat ramps are closed in Utah?

“It’s not too late,” Molly Blakowski stated. “The time to act is now.” Blakowski is a Ph.D. student at USU. She has been researching the lakebed and the dust it produces for the last three years.

In the dozens, if not hundreds, of samples she’s taken, she’s found elevated levels of heavy metals in the dust. “And so, part of the work I’m doing is to discover where did those metals come from.”

She explained these substances could be a mixture of naturally occurring metals and a century’s worth of pollution. She said that finding the sources of these metals could help shape future policies that reduce additional contamination. Blakowski said while the heavy metals she’s sampled can be toxic to humans, they just don’t know enough about how much dust people along the Wasatch Front are being exposed to, so they can’t say what those health effects will be yet.

“The scientists who are doing the calculations are going to have to give us a sense of how much we can do through conservation,” said Senator Mitt Romney (R-UT). The senator is one of many state and federal officials trying to secure funding for research on the lake.


Using every last drop, Utahns get creative to conserve water

He told reporters he hopes researchers will find that we can reverse the lake’s decline through conservation alone. However, that may not be the case and he believes if conservation isn’t the sole solution to solve the problem, it could cost billions of dollars to invest in new technology to aid in the work of preserving the lake. “If not, we’ll have to look at some of the more extreme options,” said Romney, referring to conservation. “I hope we don’t reach those.”

Researchers have hope that it’s not too late for the lake, but they say the solutions probably won’t be easy fixes. “And that’s where shepherding that water, sometimes through new legislation, water rights that can capture that water and bring it to Great Salt Lake are so important,” Dr. Null added.

Blakowski is currently working on a study with a team of geologists to get a better understanding of how winds carry dust from the lakebed across the Wasatch Front and which cities are hit the hardest. She told ABC4 they hope to have their findings published later this year.

Minnesota’s Finstad sworn in as newest member of Congress | News

Minnesota's Finstad sworn in as newest member of Congress | News

How a railroad strike could send food prices soaring