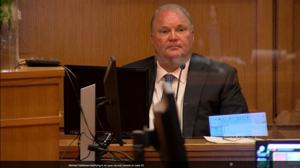 While Gableman found no evidence of widespread fraud during his inquiry, he had joined Trump in calling for lawmakers to consider decertifying the 2020 election — something Vos and legal experts say is unconstitutional and impossible.

Vos announced the investigation last year under pressure from Trump and chose Gableman, a conservative former Supreme Court justice, to lead it. But as the investigation progressed, Vos’ relationship soured with both Gableman and Trump.

When he hired Gableman, Vos had said he was “supremely confident” in his abilities. By Tuesday night, Vos was calling him an “embarrassment.”

“After having many members of our caucus reach out to me over the past several days, it is beyond clear to me that we only have one choice in this matter, and that’s to close the Office of Special Counsel,” Vos said Friday in a statement issued first to The Associated Press.

My statement on closing of the Office of Special Counsel pic.twitter.com/qsgH0Regov

Gableman, who has repeated Trump’s lie that the 2020 presidential election was “stolen,” has said that Vos “never wanted a real investigation.” He and his attorney, James Bopp, did not immediately respond to emails seeking comment.

His investigation had drawn bipartisan scorn, and his firing generated bipartisan praise.

Britt Cudaback, spokesperson for Democratic Gov. Tony Evers who has been highly critical of Gableman and the probe, reacted with one word: “Finally.”

“It was a good decision. It would have been a better decision six months ago,” said Republican state Sen. Kathy Bernier, chair of the Senate elections committee, who went on to add that she has “zero respect, for Michael Gableman.”

Vos had repeatedly said the goal of the probe was not to overturn the 2020 election, a move Gableman acknowledged was impossible in a private memo to Vos. Even Gableman’s attorney Bopp told lawmakers that decertification was “pointless.”

Vos hired Gableman to quell pressure he was feeling from those who believed Trump’s false claims about the 2020 election. President Joe Biden won Wisconsin by nearly 21,000 votes, an outcome that’s survived lawsuits, recounts, reviews, audits, in addition to Gableman’s own investigation.

Unhappy with how he was treated by Vos, Gableman’s public comments critical of the speaker increased as did Trump’s. In April, Gableman called for pressure to be put on Vos to extend the former justice’s contract. Vos did so — albeit with a pay cut from his initial $11,000 a month. Vos put the investigation hold in May, pending resolution of ongoing lawsuits.

Their relationship reached a tipping point when both Trump and Gableman endorsed Vos’ primary opponent, leading to a tighter-than-expected race. Vos eked out with a 260-vote win. Vos said his victory showed lawmakers “don’t have to be a lapdog to whatever Donald Trump says.”

On Tuesday, a judge was to determine whether Gableman remains in contempt of court for not complying with the state’s open records law. Dane County Circuit Judge Frank Remington forwarded his contempt order to the committee that disciplines attorneys for possible further action, including suspension or repeal of Gableman’s law license.

That is one of six pending lawsuits related to the investigation.

The attorneys’ fees awarded so far has resulted in the total tab for Gableman’s investigation, all paid by taxpayers, that tops $1.1 million.

Wisconsin Attorney General Josh Kaul, a Democrat, said he was glad Vos decided to shut down what he called a “colossal waste of tax dollars to promote the Big Lie.”

“What we knew before this started remains true today: our elections are free, fair, and secure, and the results of our elections reflect the will of the voters,” said Kaul, who has a pending lawsuit against Gableman.

Gableman has used the probe to raise his national profile. He gave the prayer at Trump’s Wisconsin rally this month and he’s been a regular on conservative talk radio, including an appearance where he disparaged how Wisconsin’s chief elections official dresses.

Democratic state Sen. Melissa Agard said it was “past time” for Gableman to be fired.

“I’m glad that Speaker Vos has stopped the bleeding for these tax dollars going to a sham investigation,” she added.