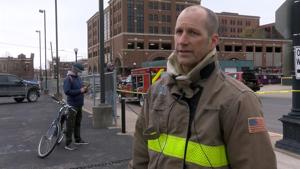 LA CROSSE, Wis. (WXOW) – The City of La Crosse moves up one of its own as its new fire chief.

The city’s Police and Fire Commission named Jeffrey Schott as the new Fire Chief on Friday.

He’s served with the department since 2000 when he joined as a firefighter.

Since then, he’s worked his way up through the department as an EMS trainer, Lieutenant, Captain, and became Battalion Chief in 2018. He became Interim Assistant Chief-Fire Rescue Operations in April.

Schott won the job over three other finalists.

In its statement announcing the choice, the PFC said that they are “confident that Jeff’s experience and dedication to fire prevention and protection will be a tremendous asset to the La Crosse Fire Department and the City of La Crosse.”

According to the city, the Police and Fire Commission will confirm Schott’s appointment as chief on August 17. He will take over as Fire Chief on August 19.