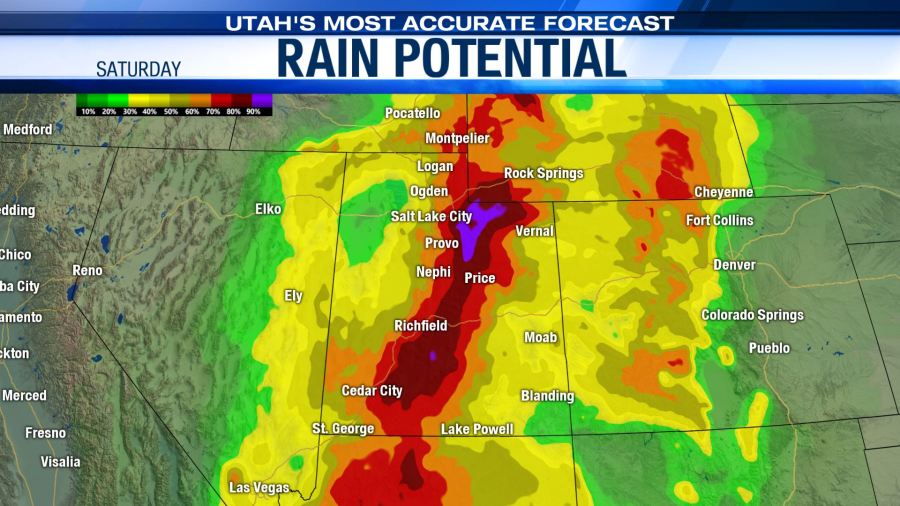 SALT LAKE CITY (ABC4) – Happy weekend Utah! As we move through the weekend, our weather won’t see too many changes compared to what we saw for most of the workweek.

That means more scattered showers and thunderstorms across the Beehive State with the best chance being in the afternoon and evening. The best chance for storms will be along and near the I-15 corridor, especially in the higher terrain. Even in most valleys, there’s better than a one in three chance for seeing a shower or thunderstorms. Storms are least likely in northwestern Utah and southeastern Utah, but like we have seen over recent days, isolated showers and storms will still be possible as plenty of monsoon moisture is over Utah.


‘The Nature of Color’: Presented by the Natural History Museum of Utah

The Flood Watch for southwestern Utah will continue through Saturday evening as well with it stretching from southwestern Wyoming down through the western Uinta’s and Wasatch Mountains south of I-80, then through the central mountains, and eventually down through Kane and Washington Counties. Areas with the highest risk of flash flooding in central & northern Utah and SW Wyoming are burn scars. Even outside of the watch, flash flooding will be possible along with urban and small stream flooding as storms will be capable of heavy rain. At all our National Parks in southern Utah, flash flooding is more of a probability rather than a possibility both days this weekend so be sure to have multiple ways to receive alerts if you have any hikes planned.

Outside of showers and thunderstorms, skies will be partly cloudy to partly sunny with daytime highs coming in near or slightly below seasonal averages. This will result in low 90s along the Wasatch Front, 80s for the Wasatch Back and Cache Valley, while southern Utah mainly sees 80s and 90s for highs.

Sunday won’t bring many changes compared to what we see on Saturday, but as we move into the early half of next week, moisture levels are likely to take a little dip in northern Utah leading to fewer showers and thunderstorms and slightly higher heat Monday and Tuesday. Meanwhile, moisture levels will stay high in central and southern Utah which will mean more scattered showers and storms. Monsoon moisture is likely to make a comeback in northern Utah and SW Wyoming by the second half of the work week. Long-range outlooks suggest this active monsoon pattern could persist for the next couple of weeks. Stay tuned!

Bottom Line?! Scattered showers and storms continue through the weekend with the potential of flash flooding.

Always stay one step ahead of the weather with Utah’s Most Accurate Forecast both on-air and online! We are There4You!

Salman Rushdie on ventilator, will likely lose an eye after New York stabbing

Denise Dowse, of ‘90210’ and more, in coma after contracting viral meningitis