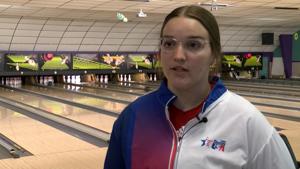 LA CROSSE, Wis. (WXOW) – Anna Callan graduated from Holmen in 2021, and has made the most of her time since as a nationally recognized athlete in the sport of bowling.

It may not be basketball of softball, but Callan says that the game runs deep within her family.

“Some families struggle to find something to bond over,” Callan said. “So for a family as a whole to eat, sleep and breath bowling is amazing. Both of my parents are on the state board trying to promote better for the youth. It’s something I also want to do in my future because promoting for the youth is something that I think is important to keep the sport alive.”

Callan’s hard work finally paid off last month after claiming the Junior Gold Championship title. The victory secured a roster spot on Junior Team USA in 2023, something she says narrowly escaped her in the past.

“I went to team trials once,” Callan said. “That was in January of 2022. I missed team by technically one spot. They took the top six females. I was number seven. When that happened, I realized Junior Gold could be an opportunity that I could achieve. When I was there, I was like ’I want to make top 16.’ But I knew I had to get to the last match to get my Junior Team spot. When that happened, that’s when everything set into place. I got what I wanted. I want to finish this and win it. To get that Junior Team spot, it was just a dream come true.”

Team USA Bowling assistant coach Andy Diercks tried to recruit Anna to play for him collegiately at Mount Mercy University, and says there are parts to her game that stand out from the competition.

“I think one of the things that helps her is that she has really good ball speed and a really good rev rate,” Diercks said. “Which means she spins the ball fairly quick compared to a lot of the young ladies out there. That’s one of the things that gives her an edge. In addition, I think she’s become a very patient and knowledgeable player as well. She keeps her whits about her. She stays in the present moment. She stays focused on the shot that she’s in and not chasing an outcome she can’t control.”

Ultimately, Callan chose to play at the University of Nebraska and a program with six NCAA championships. Once she visited the campus, Anna knew Lincoln was the place for her.

“With the DI schools, I actually could not technically visit I had to do it on my own time,” Callan said. “Use our own money. Usually on DI visits, they pay for you to come visit. That was a bit different. When I stepped on Nebraska’s campus, I told myself this is it. I just had that moment where this feels like a little bit of home, but it gives me the space I needed because it’s such a big school.”

Nebraska head coach Paul Klempa says that he hopes to see Callan succeed as she prepares for her redshirt freshman year, but doesn’t want to bestow too much pressure on his national champion recruit.

“I think she’s poised to have a really solid year,” Klempa said. “She did travel with the team on several occasions, so she got to know the ropes of college bowling. The rigors of travel. How college bowling tournaments function and work. I expect some good things from her. I don’t want to overshoot it and say she should start every tournament and she should be vying for Player of the Year. I don’t want to overstate it. I think reasonable goals are be in the hunt for Rookie of the Year, contribute to the team, help us succeed. Those are pretty good goals to me.”

Now Callan has a lot of responsibility as she prepares to represent the Huskers and America in competitions in the near future.

When asked what people will say about Anna Callan in 2023, she says both a national champion with Nebraska and a great teammate.

What’s the difference between a meteor, meteoroid, and meteorite?