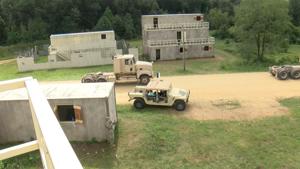 FORT MCCOY, Wis. (WXOW) – Every year, soldiers in the U.S. Army Reserves undergo training to learn how to deal with a convoy of vehicles in many situations.

Those drills were held Monday at Fort McCoy with troops from California, Puerto Rico and other places taking part. The majority of soldiers serve support roles in the military.

Sergeant Andrew Ellis, part of the 41st Engineer Company based in Fort Riley, Kansas, was one of the few active duty soldiers on hand and says that training like this is vital for when forces go to the front lines.

“With convoys, generally that means that there’s going to be supplies that are needed further down on the battlefield,” Ellis said. “There’s the troops that are needed somewhere else. The fact that the security is maintained at all times between our equipment that’s in these vehicles, it’s better that they understand what is needed to maintain that security so they can’t compromise it and lose it or we just don’t lose any kind of supplies to be used against us later.”

There were four major drills they took part in. Those include dealing with civilians, an ambush of enemy forces, chemical warfare and dealing with a vehicle that breaks down. Civilians used in the drill are locals contracted to take part in the simulated practices.

Sergeant First Class Matthew Helwer of Milwaukee says that many soldiers and vehicles took part Monday but is easily overshadowed by a real convoy and that civilians are vital to protecting America overseas.

“We’ll have six units of various numbers,” Helwer said. “They’re roughly between 15-30 soldiers in each particular unit. And anywhere from three vehicles to 20 vehicles depending on their capabilities and size of their unit. Civilian help is crucial. Getting the intelligence on the ground. Getting the lay of the land because they know it better than we would know it. Learning to interact with the local populous is a key to mission success.”

No one was harmed or in any danger during the events of this story.