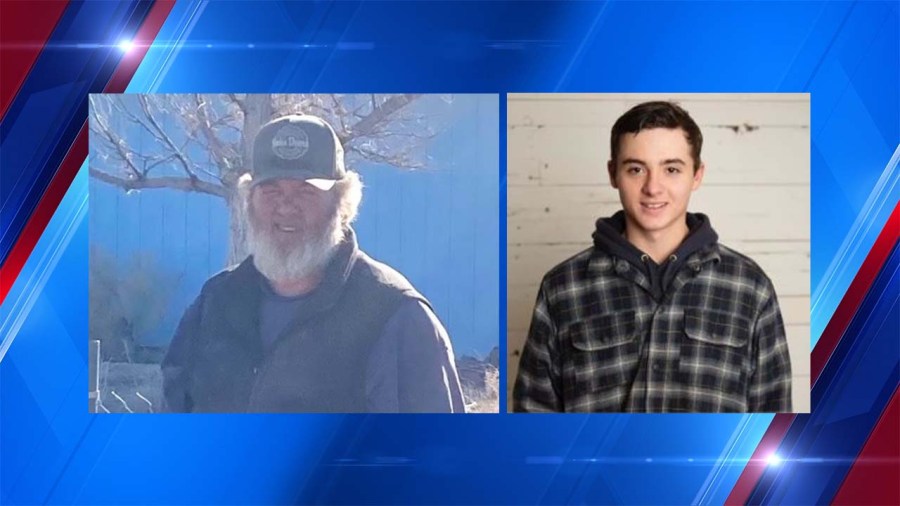 In June, the Box Elder Sheriff’s Office named Brenner a suspect in the disappearance of Dylan Rounds.
The 19-year-old vanished on Memorial Day weekend and hasn’t been seen or heard from.

“I knew it was going to happen,” said Candice Cooley, Dylan’s mother. “I didn’t want to release it because we didn’t want law enforcement bombarded.”

But earlier Monday, Ty Corbin and Lance Kelly were there to watch authorities from the Elko County Sheriff’s Office drive towards their target. Kelly took video of law enforcement driving past them.

“We found out 5-minutes before taking the video,” said Kelly. “We got a tip the FBI was at the post office.”

Corbin said they also got closer to authorities as they pitched a canopy possibly for their search or shade.

“We didn’t want to get to close and interfere with their search,” said Corbin.

“It’s on James Brenner’s property,” Cooley said. “So it was property that he had. It was a shack that he lived in and I knew about this property. Dylan told me about his shack burning down.”

Brenner currently is at the the Weber County jail on separate charges of being a felon in possession of a weapon and an assault.

By noon, news of the search went viral on social media.

Brenner at one time worked on Dylan’s farm outside of Lucin in western Box Elder County. After Rounds vanished, authorities found Brenner squatting on the 19-year-old’s property.


What’s the difference between a meteor, meteoroid, and meteorite?

Cooley was certain cadaver dogs would be used in their search Monday.

“I know Elko County is showing up in full force,” she said. “They were not going to leave any stone unturned. So I am sure they got their dogs out there. They are going to go out there and wipe that place clean. We can either have more questions or have evidence or we can wipe it off our slate.”

Late Monday afternoon, Cooley confirmed cadaver dogs were used but authorities did not find anything related to the investigation.

She said Elko County’s quick response is why they want another police agency to take over the investigation instead of Box Elder County. More on that Wednesday.

Kelly also said they had tipped the FBI about something odd on Brenner’s property.

“What I saw there (Brenner property) when we showed up was the burnt frame of his trailer,” Kelly said. “There was clearly an explosion. We walked a little bit further and my wife noticed two shovels. One of them sticking straight up out of the ground and next to the shovels were two depressions of dirt where someone had clearly been digging and had filled them back in and near one of the depressions was a pick ax.”

He said they documented the area and forwarded what they found to the FBI. It may have been the probable cause needed for authorities to convince a Nevada judge to sign off on the warrant.

‘I felt the scales, then I felt the teeth’: Florida firefighter tells how he survived gator attack