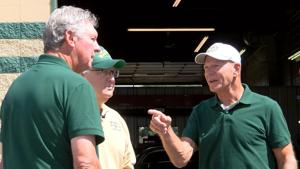 News 19 got the chance to speak with the duo and talk about their playing days. Dickey, who was with Green Bay from 1976-85, says that once those days were over, he felt grateful for an opportunity not many people get to see.

“I felt better on Monday mornings, I’ll tell you that,” Dickey said. “Paul and I were so lucky to hang around for a long time. It’s an experience that unfortunately not everybody has the opportunity to do, but I feel really lucky that I was able to do it for a long time.”

Both were eventually inducted to the Packers Hall of Fame for their efforts. Coffman played with the club from 1978-85 and holds that honor close to his heart.

“I think that was the crème de la crème,” Coffman said. “The cherry on the top. It was the final part of the story. I didn’t get a scholarship. I didn’t get drafted. I made the team. I was able to play in some Pro Bowls. To be inducted into the Green Bay Packer Hall of Fame as one of the best to ever put on the green and gold, I just felt like that induction capped it all off for me.”

Both say that they feel the Packers will do well in 2022 following an investment in the defensive side of the ball in this year’s draft.

Why Jaws and E.T. are back in theaters | News 19 Daybreak