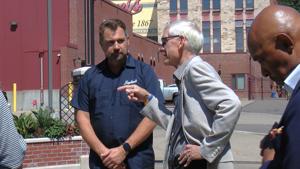 LA CROSSE, Wis. (WXOW) – As campaigns heat up across the country, a local analyst shares his thoughts on how candidates may go about their strategies.

Anthony Chergosky, an assistant professor of political science at UW-L, said the battle for Wisconsin governor may come down to national perspectives of the two parties.

“Tony Evers has some difficulty in terms of his party as a whole,” Chergosky said. “We know that the party of the president tends to struggle in midterm elections. We know that Joe Biden’s approval rating sits at just 40 percent. All of that is going to have an effect in other races. It’s going to affect democrats across and up and down the ballot.”

Chergosky added that Evers may emphasize Republican Tim Michels’ endorsement by former president Donald Trump. Both GOP politicians have a favorable rating of around 35-percent according to Chergosky, who said Evers can use that to his advantage when trying to sway other voters.

As for Wisconsin’s 3rd Congressional District, he said the Wyoming primary loss for Liz Cheney can be telling of what is to come in November. Republican Derrick Van Orden is backed by Trump. Chergosky said that can play a role in how the GOP goes about the upcoming midterm.

Chergosky said Democrat Brad Pfaff may try to shy away from the standard views of his party and show he is more moderate and representative of the people who call Western Wisconsin home. Chergosky said this approach helped Representative Ron Kind get elected 13 times in a traditionally Republican leaning area.