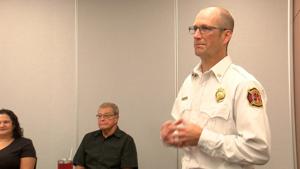 Jeff Schott was sworn in as the city’s 13th Fire Chief following unanimous approval by Police and Fire Commission.

Chief Schott last served as a battalion chief and was not originally considered a finalist for the job. After deciding to apply, the city ultimately selected the 47-year-old who has been with La Crosse his entire career.

Once the ceremony was complete, it was straight to work for the new chief. The department has been facing a lot of turnover and is expecting even more retirements in the near future. As a way to recruit, the department has two new fire stations in the works.

“We have a lot of youth,” Schott said. “We also have a recruitment challenge. The police, fire and emergency services are struggling to find people in the workforce just as they are everywhere else. We have to come up with innovative ways to keep people coming into our agency. That have the skills and abilities that we’re looking for. When you start building two fire stations in the mix, suddenly a 100 person department gets a little busy in terms of what we’re doing to grow and build and recruit and retain and promote our people from within.”

Fire Station 2 is currently under construction near the UW-L campus. Chief Schott said Fire Station 4 is expected to break ground in the spring.

The chief’s wife, Avrie, serves as a Captain with the La Crosse Police Department. Chief Schott joked during his inaugural speech that their marriage proves that the differing departments can in fact work together from time to time.

Onalaska Walmart gives back to the community | News