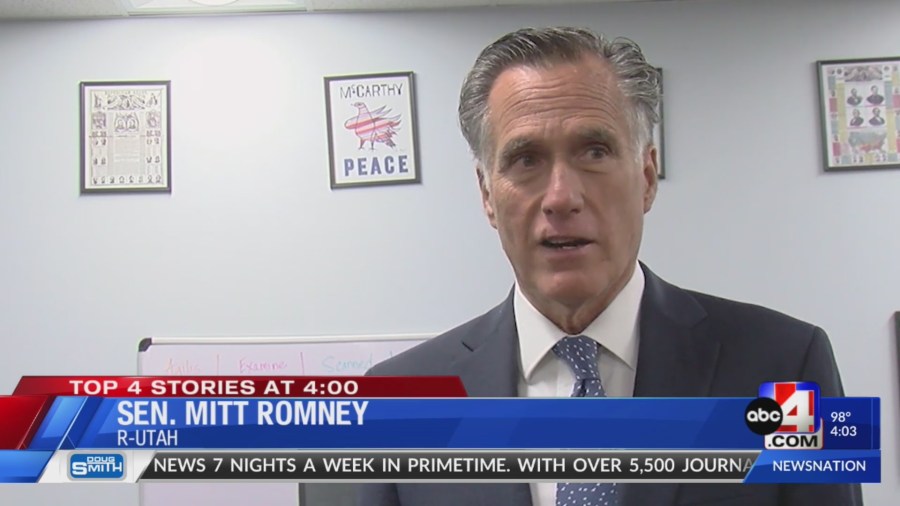 UTAH (ABC4) – Senator Mitt Romney (R-UT) is encouraging Utahans to tour their local elections office to learn more about the process before the upcoming midterm election. His suggestion comes after touring the Weber County Elections Office Thursday morning to learn more about Utah’s election security measures for himself. He has also recently introduced two proposals that could impact future elections.

“The system we have in place here is accurate and fair and is unable to be attacked and corrupted,” Sen. Mitt Romney told reporters after taking a tour of the Weber County Elections Office. He added: “I can’t speak for every other state, but I can say with regards to our state, I am fully confident without question that our election security is real.”

Elections officials gave the senator a personal tour of the ballot counting process during his visit. They showed him the equipment that verifies every ballot envelope that is dropped off during an election, the equipment that scans the filled-out ballots, the program that allows states to interact with one another and ensure that no voter is registered in more than one state, and introduced him to the people who go through obituaries daily to ensure there are no ballots cast by dead voters.

Sen. Romney recently proposed legislation (along with more than a dozen other lawmakers from both major parties) to improve the election process in the United States. He is waiting for Senate Majority Leader Charles “Chuck” Schumer (D-NY) to send that legislation to the floor for a vote. “I don’t know that it’s going to make it more secure here in Weber County,” Romney stated. “What you have here is A+.”

Part of the bill would provide funding for new election equipment in counties across the country. Equipment much like the machines already in use in Weber County, and other counties in the Beehive State.

Another part would increase penalties against those who intimidate or threaten election workers.

“They’ve come under a lot of heat under that past couple of years and it’s good to recognize that can have a debilitating effect not just on them and their families’ lives, but on the integrity of the elections in general,” Ricky Hatch told ABC4. Hatch is the Weber County clerk and auditor. He said that Utah election officials are not immune to harassment.

“There have been times when my staff and I have not felt, particularly, safe,” Hatch added.

Hatch, like Sen. Romney, encourages those who don’t trust the election process to take a tour of their county’s elections office. Hatch explained that they are always open to the public and love to answer all questions or concerns they may have.

“If they’re going to be open to having anyone there must be something that they’re doing right,” Sharon Bolos told ABC4. “They must have faith in their own process.” Bolos has run for local office in the past. Just recently, she won the republican primary in a race for a Weber County commissioner vacancy.

“I think anyone who comes in here and watches everything that we saw today would have faith in the process,” Bolos stated.

Romney told reporters that he believes his proposed legislation will be up for a vote before November. However, he said Schumer could wait until after the midterm to send it to the floor. Romney added, “But I think it’s important to have this in place, certainly, before the 2024 election.”

Part of the proposed legislation would also update the electoral vote to better reflect each state’s vote for a presidential candidate. More information can be found by clicking here.

Man arresting for exposing his private parts at BYU in Utah