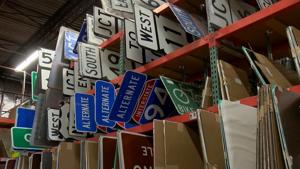 MADISON (WKOW) – The Wisconsin Department of Transportation (WisDOT) maintains thousands of informational and directional highway signs across the state which can cost a lot of money but one WisDOT supervisor is helping to conserve costs.

Wisconsinites know where they’re going and how fast they can drive, thanks to a state warehouse full of highway signs.

“The signs are very important for motorists’ safety and making sure that we convey clear messages to the motorists on traffic regulations,” said Matt Rauch, WisDOT Traffic Design Unit Supervisor.

More than 300,000 aluminum signs now decorate Wisconsin’s state roads and highways. In 2017, the state stopped using plywood to save money.

“The aluminum signs have reclaimed value for the state at the end of their life, which plywood does not. Plywood, it ultimately ended up going to the landfill,” said Rauch.

Matt says millions of our hard-earned dollars are saved by simply replacing all state signs on an entire highway during one operation.

“By concentrating your work in one area. You eliminate a lot of that windshield time of bouncing around all over the place. For example, highway 18 is a corridor. So all the way across state Highway 18. We’re replacing the highway signs,” said Rauch.

On top of that, several thousand dollars are saved by making small corrections in-house.

“Instead of throwing out or reclaiming a sign, if there’s a correction that needs to be or a modification to a sign, we have the capability to do that here rather quickly,” said Rauch.

If you’re looking to purchase those old signs, well that’s a hard stop.

“We are prohibited by statute from selling to private individuals,” said Rauch.

Rauch says WisDOT also saved taxpayers more than $125,000 dollars a year through its recycled aluminum process, where undamaged worn signs are stripped of their markings and reused to make new signs.

What is Legionnaires' disease?