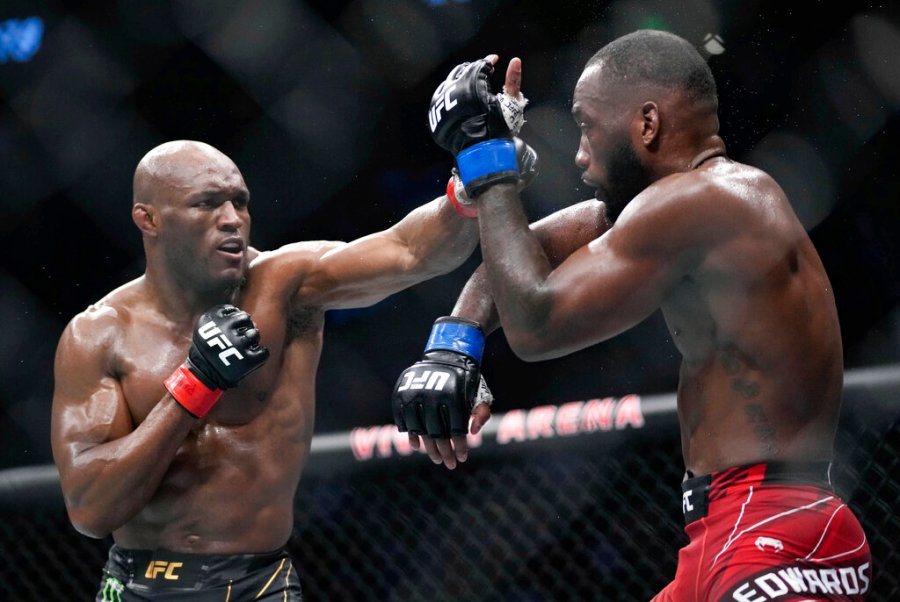 SALT LAKE CITY (AP) – A sold out Vivint Arena played host to one of the most stunning upset wins in recent UFC history.

Leon Edwards dropped Kamaru Usman with a kick to the head and neck in the final minute of the fifth round to win the welterweight championship at UFC 278 on Saturday night in front of 18,371 fans in the biggest fight night ever held in the state of Utah.

Usman appeared to be seconds away from a 16th consecutive victory, which would have tied an all-time UFC record, before Edwards came up with the stunning finish just in time.

Edwards (20-3) is undefeated dating back to his previous bout with Usman in 2015. The British fighter rose to No. 2 in the welterweight division while accumulating nine wins in that stretch ahead of the title bout.

Usman (20-2) lived up to his reputation as the No. 1 pound-for-pound fighter in the world for much of the bout. The Nigerian weathered a late first-round takedown and turned the tables with a late second-round takedown. Usman controlled position throughout the third round, earning two more takedowns. Usman appeared on his way to a win by unanimous decision before Edwards rallied in the final round.

The finish came at 4 minutes, 4 seconds of the fifth round. Usman was considered the best pound-for-pound fighter in the world.

“I can’t put it into words,” Edwards said.

Usman had been dominating the fight after the first round and was up 39-37 on all three judges’ scorecards entering the fifth. But late in the fifth, Usman leaned down to his right to defend an Edwards left and Edwards caught him flush with a left head kick, sending the sold out crowd into a frenzy. Usman, who was out on contact, was less than a minute away from a sixth title defense.

Usman (20-2) had five title defenses prior to the loss Saturday. The Nigerian-born fighter, who trains out of Colorado, had been UFC welterweight champion since beating Tyron Woodley at UFC 235 in March 2019.

Rockhold (16-5) returned to the octagon for the first time in three years and his rust showed as the bout progressed. Costa more than doubled Rockhold in total strikes through the first two rounds and eventually left him with a bloodied mouth in the third round. Rockhold wiped his own blood over Costa’s face in the round’s final seconds while both fighters were locked in a stalemate on the ground.

Merab Dvalishvili prevailed over former UFC featherweight champion Jose Aldo in a unanimous decision in the men’s bantamweight bout, earning his eighth straight win. Aldo (31-8) had vocal support from the crowd but wore down under relentless pressure from Dvalishvili (15-4) over three rounds.

Lucie Pudilova beat Wu Yanan in the main card women’s bantamweight bout for her third straight win. Yanan suffered her fourth straight loss. Pudilova earned a TKO at the 4:04 mark in the second round after dragging Yanan to the canvas and repeatedly smashing elbows into her from a back mount.

Tyson Pedro earned a TKO over Harry Hunsucker 1:05 into the first round in the light heavyweight bout to round out the main card bouts.

Marcin Tybura handed Alexandr Romanov his first career UFC loss in the heavyweight bout, winning by majority decision. Romanov (18-1) slammed Tybura (23-7) to the canvas multiple times in the first round but ran out of steam in the remaining two rounds.

Sean Woodson and Luis Saldana fought to a rare spilt draw in a featherweight preliminary bout earlier in the evening. It was the first career draw for both fighters.

RSL gives up late goal, settles for 1-1 draw against Vancouver