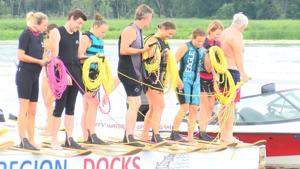 LA CROSSE, Wis. (WXOW) – The River City Water Ski Show Team was founded in 1972 and held a special showcase Saturday at Airport Beach to celebrate a half century of performances.

Members past and present took to the Mississippi and showed off many tricks such as backflips and tandem skiing.

Rich Rice was a part of the team for around 20 years and says that water skiing can be enjoyed by anyone.

“This sport has always been known as a great family sport,” Rice said. “There’s something for everyone. There’s boat drivers. There’s behind the scene costume and sound people. Of course, there’s the skiers of all ages, shapes and sizes. It’s really one of the sports that you can carry on as a family and continue on for years.”