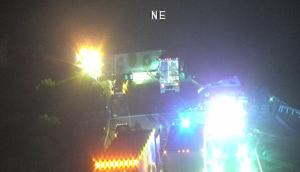 TOMAH, Wis. (WXOW) – A semi hitting a cow on I-94 late Saturday night near Tomah leaves one person injured and a portion of the interstate closed for more than ten hours.

The Wisconsin State Patrol said around 11:24 p.m., the semi hit a cow in the roadway. The semi-trailer crashed through the guard rail and came to rest on its side in the median.

Both lanes were blocked when a second crash happened.

Information on the person injured or condition wasn’t immediately released.

Traffic was rerouted between Tomah and Oakdale while the scene was cleaned up.

Crews spent all night clearing the scene before the interstate was reopened to traffic again shortly after 9:30 a.m.

No injuries after small helicopter crashes into power line | News