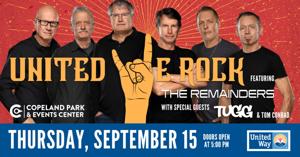 United We Rock is Thursday, September 15 at the Copeland Park & Events Center. The free community concert features three performances which begin at 5 p.m.

Tom Conrad begins the show, followed at 6 p.m. by TUGG, with The Remainders rounding out the evening at 7:30 p.m.

Besides the music, there are other activities going on that evening where people can contribute to the Great Rivers United Way. There’s two prize raffles, a 50/50 cash raffle, as well as the chance to buy band and United Way merchandise.

Those coming early get some special prizes. The first 250 people receive a swag bag with goodies from Great Rivers United Way and the event sponsors. The first 100 people who come to the concert wearing a Live United t-shirt get a ticket for a free drink.

All of the money raised at the event goes to support the Great Rivers United Way’s 51 partner programs.